Folding Phones in 2019: Fad or Functional? 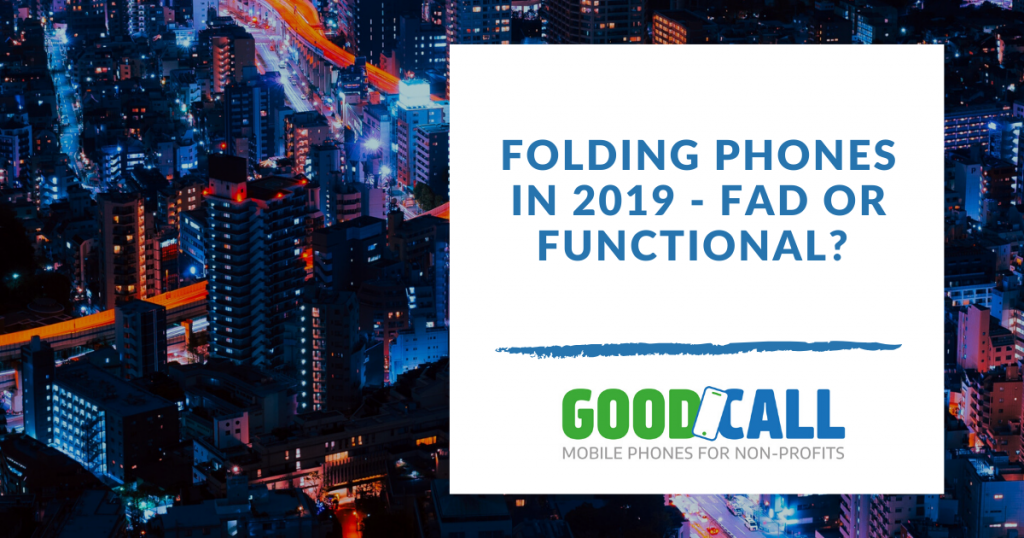 It was predicted by mobile experts that 2019 would be the year of the ‘foldable’ phone – with screen-bending tech pitched as the future of mobile devices. However, we haven’t seen many folding devices being launched this year due to a string of delays and pushbacks on the release of new models. This article will explore what this new tech means for consumers and help you choose whether you want to invest in the new folding phones.

The Samsung Galaxy Fold finally went on sale in the UK on the 18th September 2019. Industry reviewers have commended the release for being the first to really deliver on the promise of a foldable screen, offering a stylish new concept that’s been popular with consumers due to the buzz around folding tech. The phone folds down to a 4.6-inch phone-sized interface and folds out to become a 7.3-inch tablet display. However, it comes in at nearly double the cost of today’s top of the range devices with retail prices ranging anywhere from £1500 to £1900. The Fold has a very troubled track record in terms of long-term durability. The Fold’s release was marred by a five-month delay when the screen broke and became unresponsive along the hinge mechanism in the hands of early reviewers. These issues have mostly been resolved on release; however, it remains to be seen how well the device holds up with long-term use.

The Huawei Mate X will launch nearer the end of 2019 and has suffered similar release date setbacks. While it offers a more durable 6.6-inch wraparound screen, it opens out into a 8-inch tablet. The screen’s hinge in the Mate X has been praised as far more robust and hard-wearing, offering a better folding mechanism. However, due to the ongoing trade issues between the US and China, the future of Google Android OS running on Huawei and Honor phones is currently uncertain. Some major providers and outlets have even advised consumers not to purchase these handsets. While Google and Huawei have vowed to maintain support for phones which are currently on the market, it’s not clear how long they will allow updates or access to the Google Play Store, which would severely hinder the model’s compatibility and usefulness for UK users.

While they look impressive and have generated quite a consumer buzz, the new foldable screens are produced with extremely thin, bendy plastic membranes which unfortunately make them far more susceptible to breakage and tearing – at least in these early models. Debris can also get stuck along the hinge making it impossible to fold out the screen, rendering it unusable. While we’re excited by the developments in handset capability and novel design concepts, these vulnerabilities along with the very high price point make foldable phones a liability for the every-day user. We’re excited to see how this technology develops further – but with the current models available, these wouldn’t be the best option for our charity and social enterprise customers.

What do you think about the future of folding phones? Get in touch with us to share your ideas at hello@goodcall.org.uk.